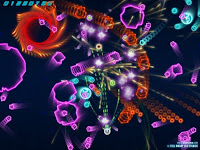 Echoes is an arena shooter by Binary Zoo which consists of ten levels, with a different enemy type introduced on every new stage. Each have their unique strengths, weaknesses and require various strategies to deal with effectively.

The player loses energy when collision with an adversary could not be avoided. Remaining energy is shown as a counter on the top right of the screen, also indicated by the colored ring surrounding your ship. There are only three different power-ups to collect. One increases firepower, the other restores health while the third is a sort of bomb.

Zoots awards are handed out whenever a certain task is completed, with current achievements available to peruse via the trial accomplishment screen. To get a perfect score, all ten objectives must be attempted at the highest difficulty.

One word: WOW! and another one: DAMN!...seriously, this is the most stylish and polished mixture between Asteroids and Geometrywars I've ever seen. And a total blast to play too. Love the instructions and the sexy glow-look!
THANKS A LOT!