If you're using RSS feed and hadn't seen any updates recently, you need to switch to feedburner for the latest news. Thanks!

http://feeds.feedburner.com/IndependentGaming
Posted at 11:18 AM by Tim

Here's some news - the Independent Gaming weblog is moving to a new domain and becoming IndieGames.com: The Weblog, as part of the CMP Game Group (Independent Games Festival creator)'s outreach into the independent gaming scene.

Please change your bookmarks to point to IndieGames.com: The Weblog at http://www.indiegames.com/blog - indygamer.blogspot.com will no longer be updated. The Feedburner RSS feed for Independent Gaming has been automatically switched to point to the new site. Comments are being migrated as we speak.

Thanks to the CMP Game Group and Simon Carless for the invaluable support and hosting of the new site; we promise to continue to serve all your indie games news and review needs as we have done before. Here's a word from Simon about this change:

Simon: "Hey folks - you may know me already from running GameSetWatch and also helping to manage various other Game Group properties like Gamasutra, Game Developer magazine, and - of course - the Independent Games Festival, which is definitely the most relevant for this announcement!

This whole concept started a couple of months ago when Tim announced that he might have to shut the Independent Gaming blog unless he got some help in hosting and partly paying for his time working on the site. We wanted to help out, and we'd already launched IndieGames.com to help educate people about independent games, so having him move his blog over here made a lot of sense.

So nothing is really changing here - Tim's still got an open editorial remit to blog and interview who he likes, and we may occasionally pop in to mention IGF and other Game Group-related news - which is likely of interest anyhow. We'll also be working with him to look at whether we can help to better develop the indie scene through setting up better distribution mechanisms for independent games - though we've only just started thinking about this."
Posted at 12:01 AM by Tim 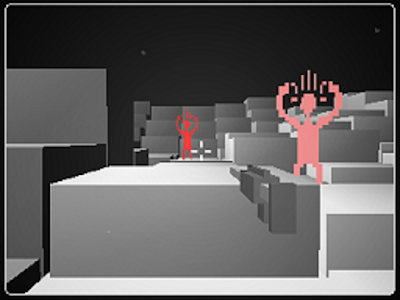 UPDATE: cactus has decided to update the game due to the feedback he's gotten. The jumping level is now easier and skippable for those who have trouble beating it. There's been a few other changes as well, including vital bug fixes.

This is cactus entry for the winter competition at YoYoGames.com.

"Welcome to Mondo Agency! An eerie cyber FPS with horror and puzzle elements. As an agent it is your mission to kill laser indians and save the president!

Turn off your lights and turn up your speakers for maximum enjoyment!"

Recent Comments
Feed Update Announcement: IndieGames.Com: The Weblog Mondo Agency ahaha oh god what
This is going to be a fun ride through hell isn't it Don't have the patience to make it through the jumping towers level (level 2, i guess?)

I really don't understand why this game is so marvelous. I liked a lot of cactus's other games, but i can never really get into mondo, and I feel like if it where made by anyone else short of Kenta Cho there wouldn't be as much asspatting. Level 4 seems to be really difficult! I can't possibly keep track of all those damn laser indians. I really wanted to love this game, but I quit on level 2. Level 1: cheap falling through floor puzzles. Level 2: cheap jumping puzzle (and then I got stuck between 3 of the towers and couldn't move without quitting the game).

Mondo Medicals was cool because it was about figuring out what was going on. It only got frustrating and sucky toward the end when you got to that level with the moving blocks that squish you and you have to constantly start over.

Mondo Agency is like that level of Mondo Medicals, but from the very beginning. Ugh. Sorry about the first jumping level. Seems like a lot of people had problems with getting past that.

Didn't have time to get anything tested before release. Been a busy christmas... I can beat all the levels with ease, so I figured there wouldn't be a problem.

I need to understand where the problem is before I can fix it, though. It could either be that my monitor is too dark (and hence the game would be too bright for you to see things clearly), or that people are trying to take the wrong way to the top.

Sorry for the inconvenience. I'll post a video walkthrough to see if people can tell me what I do different when playing from those who have trouble with it. Video demonstration of first two levels
here. Loving it so far. I've only managed to play it in short bursts (it's christmas afterall) but I've reached submission 4.
Once I completed the first jump level I could easily do it a second time. My only complaint is that there should have been an ingame mouse sensitivity adjuster and autosaving. Well, cactus - if your games aren't art then I don't know what is. I'm somewhat interested in modern art myself and believe me - if you set up a computer with a demo of e.g. Mondo Agency running in an art gallery it wouldn't stand out as strange in any way. =)

However, I have to agree with Jonathan that jumping puzzles in FPP games are hardly ever a good idea. (Although I had no problems with finishing them.) @Lim-Dul: Thanks! I was concerned that I was possibly repeating Half-Life's Zen world mistake. Guess that concern had some grounds to it :( I really sound like an asshole when the person above me deletes their comment. Anyway, I can't really tell what is going on in the video on level 2, every time I jump on the towers they immediately start to get lower, and i cannot make it to the next one in time. Does it have to do with skipping the shortest tower? Also, a control to adjust mouse sensitivity would be nice, and not that hard to implement. I feel like i move my trackball one inch and I've gone full circle. You're playing with a trackball - that could explain the difficulty. You sir, have a brilliantly diseased mind. Even if I could program anything I wouldn't be able to do anything one jot as bizaare as the nonsensical text and general sinisterness. I tried playing further, and got up to Relativity Practice (or whatever the name is), at which point, after dying about 50 times, I finally quit.

cactus... this game is a lot more frustrating even than the Xen levels, because the field of view is so narrow (can't see jack) and there is very little feedback for when the player has missed or hit anything, or even when he is moving versus not.

The Mondo games are very cool in terms of atmosphere, but the atmosphere is destroyed as soon as the player starts trying to do the same annoying / frustrating thing 20 times in a row.

In the first game, at least you didn't die and have to start over all the time. You would just be kind of lost and trying to find the solution, and that fit the fiction / mood -- of being lost in this weird place and not knowing what's going on. This game is all about starting over from the beginning every time you fail, which is a lot worse (even the 2nd level where you don't literally die, if you miss a tower you start from the ground again).

I think you would benefit from finding about 10 friends (or random people) who have never played this game, then have them try and play it. And just sit there and watch, and don't say anything at all to help. Just watch them try to play, and see if that experience they're having is what you really intended to be. Apart from hurting my eyes and making me get headaches. I like the atmosphere of his mondo games. Medicals I think gets a little bit too much credit than it deserves. As illogical as the puzzles were, none of them were too difficult and none of them really made me feel that smart about myself. They were pretty basic and rather lame puzzles. I like the idea of laser indians. I mean, that's pretty awesome, but the ridiculous jumping puzzle turned me off. No more of this game. hey cactus... any word on Brave Karma Warriors? I don't keep up with your forums, but that video from B-Game competition era looks really great. I agree, Laser Indians are awesome. I want them to be in a more-playable game. cactus, when making games, never, EVER expect players to get trough something because it's easy for you. Those s(t)inking rods on level two require precision with overreactive contols, speed and either perfect 32-bit eysight or excellent memory from all the falls - because when you look at them from above they're just as white as the floor.
F-rust-rat-ing. I have observed that putting jumping in a first-person game often turns PC gamers brains into cottage cheese.

Ask them to dodge through a hail of bullets while countering with pinpoint accuracy against a dozen targets simultaneously, possibly even while reciting poetry, and it's easy. But ask someone to jump from Point A to Point B? That's impossible!

Seriously guys. The platforming level is easy. You just look up, figure out which is the next platform you need to reach (there's only one real tricky jump), then align yourself, look straight down and jump forward. There's very little chance of missing a jump.

Then again, I found Xen easy, and felt right at home playing Metroid Prime, so perhaps I'm some sort of minor god of spatial awareness. I didn't have any problems with the puzzles.

Maybe the people complaining need to get better at gaming? Ah, Cactus, how I love your mind. I'm not spoiling it, but i'm talking about the ending :D Just beat it - had to stop playing halfway through due to christmas reality and all that jazz.

Kudos, Cactus. That was genuinely nightmarish. It really does feel like a bad dream. Your own breath, tinnily echoing, the environment a hazy, glitchy mess. The dialogue is a string of disjointed half-thoughts.

Good stuff. Amusing you churn these things out so quickly, as they're good arguments for the concept of games-as-art.
Recommendations