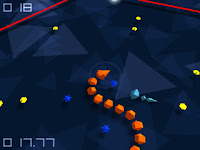 rhacp is a brilliant variation of Snake by Crostar, a regular 3Punge competition participant and also the creator of Round and Round. This particular effort uses 3D models, but retains much of the gameplay elements from the original.

The objective of the game is basically to swallow other enemies which resemble shorter versions of your creature. If any of them touches other parts of your snake's body besides the head, mines will begin to appear from the end of it's tail. Touching these mines causes the current game to end instantly.

The number of enemies to eliminate in order to progress is shown at the upper left side of the screen. Collecting all round objects will make every mine in the vicinity disappear, clearing your way when the area is getting a little too crowded.

Only the arrow keys are used to control movement. Press the Z key to start from any level. Continues are unlimited.

Nice game, who else is stuck in level 5? I collected more than 100 coins. Nothing happened. Is it about time?