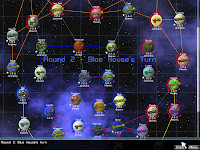 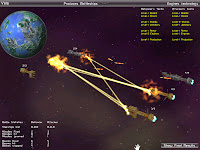 The independent turnbased strategy title Starship Kingdom tells the story about a universe at the edge of chaos. Two royal houses decide to fight for the hegemony. As a side effect, they will destroy a whole lot of independent and peaceful smaller houses, which have no intention whatsoever to expand. So far this game reflects reality...
You play one of the royal houses, of course (what an interesting game it would be if you played one of the smaller, peaceful houses!). Each turn consists of 4 phases: Deployment (new ships can be added to a fleet of one of your planets), Attack (what would that be?), Fortify (shift one planet's ships to it's neighbour) and Upgrades, where you either can upgrade a planet or the production itself.

You fight for dominance and the more planets you own, the more credits you will have and the more ships will be ready for battle at the begin of each turn. There's one thing to be mentioned: The planet are connected by lines, which indicate that you can travel from one to another planet in one turn. Planets not connected can't be invaded directly. That's an important fact to know for your strategical consideration. Planets which are only connected to your other planets you own don't need no big fleet, you can fly the ships to the front. But consider this: Once your front is being defeated all planets behind with only one ship are an easy prey. 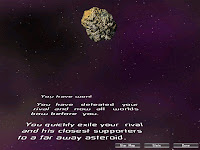 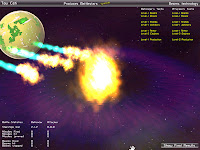 The graphics of Starship Kingdom are nicely designed. The starmap is 2D and is like a strategical commandfield, which fits excellently the atmosphere of the title. The battles are animated in a traditional way - they are being automated, you can't take influence once the battle has begun. The battles are in 3D and with nice fire and smoke effects. At any time you can skip the animation and directly see the result of the battle.
Starship Kingdom is a solid programmed turnbased title with a normal strategical depth. It will be excellent a game for people who like statistics and board-like strategical titles visualized on the computer. Nevertheless learning the game claims some time and patience, there's no tutorial game but a text file which can be accessed any time during the match, which will explain the phases and the gameplay. 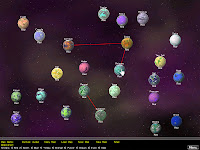 The good news is that you can play this game in singleplayer, hotseat or online. And you have an editor for the creation of custom starmaps. This guarantees a lot of content and hereby could interest you for a longer period. I think a turnbased game could do with an Email-Mode, giving you the possibility to play a game over several days while not being online the whole time.

Altogether Starship Kingdom is a good game for strategics who like board-like games with a challenging turn based battlesystem, mostly visualized by numbers and icons. If you prefer classical Age of Empires-ressembling games this won't be the right title. But if you are a Risk-fan this could be a nice futuristic alternative. There's a demo on their site to download for free.