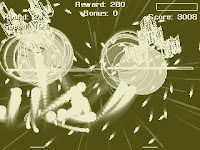 Bite the Bullet is the latest creation by 9_6, developer of the colorful Hyper Wars: The Mega Firestorm. The game plays very differently from standard shooters, in which the player has to avoid bullets for as long as possible to increase the bonus count.

Shooting with a bonus greater than ten will activate the autofire mode and imbue the ship with temporary invulnerability. The number of homing projectiles shot during this period depends on your bonus counter.

Press the A key to shoot and hold the S key to activate the slow motion mode, but only if the gauge shown at the top right of the screen is filled up. This bar replenishes steadily over time, and holding the same button will change your ship into a hit box, allowing players to easily dodge bullets.

The bonus counter increases when the player doesn't fire any shots. Destroying an enemy ship awards the player with a health collectible, though acquiring one can be a rather difficult task as your adversaries do not stay around for long.

I'm currently working on Mike the Bullet too. Even better than the other two!