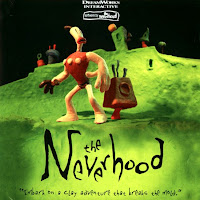 Frederator Films, an indie feature film company with the aim of producing 2-D animated genre movies with a budget of below $20 million, had recently announced three upcoming projects - with one of them being a claymation feature based on The Neverhood. The original creator, Doug TenNapel will be involved as the writer and director.

As stated by Doug himself, "I have absolutely no desire to redo the Neverhood game look... that was what it needed to be for 1995. I'm putting everything on the table story-wise and saying, What is the Neverhood about and who is Klaymen? I've been redesigning the characters and figuring it all out again with a feature-length story in mind."

This is beautiful news.
I remember playing the DEMO on a cover CD on PC Gamer many years ago, but never finding the full price version anywhere.

The Neverhood is also available from the home of the underdogs. Or at least it was once, that site isn't being maintained unfortunately.

The problem with the Neverhood is that you can play it on Windows XP, but you cannot save because it, bafflingly, wants to save to your registry. So Windows 98 or you are out of luck.

I remember playing The Neverhood on Windows XP SP1 and the save game feature worked perfectly.

The game was so good.

The save function works fine for me. I have the original CD though.

That is fantastic news about the movie! I actually reinstalled the game on the same day the announcement was made without knowing (kinda creepy coincidence).

I love this game so much, been a favorite ever since I got it with our family's original Gateway computer. Hopefully it turns out well; the game was light on plot, but damn was it entertaining.

iv played neverhood since i was 4!
and now a animated movie i comin out!
josh 11 years old
out
<< Home
Recent Comments
Recommendations