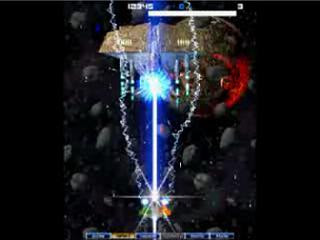 Found this gameplay vid of a homebrew game called "Odyssen" by SteevTee on YouTube. The game is said to be in an early development stage, but the graphics are already slick and the gameplay looks fast paced and varied.
The author describes it as inspired by Gradius and Treasure's shmups, which probably rings well in a lot of ears.
The player attack mechanics look and sound very interesting:
- A total of 6 main weapon systems, each has strengths against different enemies, ie, Napalm is good at close range and against bio foes. Reflect is ideal for enclosed levels. Lightning for larger electronic enemies. Blade is powerful all round but short range. Fusion creates chain reactions in destroyed enemies. Pulse is a rapid all-rounder (ie Vulcan).
- A beam weapon is charged by collecting blues and by grazing enemies and their shots. Activating beam will turn all shots to blues, which in turn will keep the beam firing longer.
There's a thread about the game here. Why not give the guy some feedback and encourage him to keep working on it.
Posted at 3:02 AM by LoverBoy69
post a comment  |  0 comments