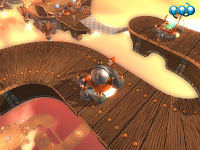 A finalist in IGF's 2006 Technical Excellence Category, Switchball's (then known as Crazy Ball) publisher was never made known to the public due to contractual terms. But digging through some dirt has revealed that the big S might possibly be the secret party which is expected to distribute the game once it is completed and ready to ship. Coincidence?

Based on impressions from the demo, Switchball has often been described as a spritual successor to Ballance - another ball-shuffling action puzzler. Presumably the new build will support the AGEIA PhysX physics hardware. Demos for both Switchball and it's predecessor are still available for download from Atomic Elbow's web site.
Posted at 3:33 AM by lemeza
post a comment  |  3 comments

The game is published by Sierra Online and available at trygames (not oficially announced yet):
http://d.trymedia.com/d/vivendi/60m_c/trygames/Switchball.exe