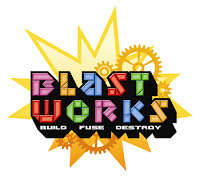 Press Release - Developed by Budcat Creations and scheduled for a Q1 2008 release in Europe, Blast Works: Build, Fuse & Destroy is a side-scrolling shooter that lets players craft the game to their liking by building their own levels, ships and enemy ships. In addition, players can "absorb" the pieces and weapons of destroyed enemy ships to bolster their own defenses during battle.

Across more than 15 different land, air and sea missions, the goal of Blast Works is to destroy enemy ships while continually growing your own into a massive craft by absorbing their fragments. Players can also upgrade their ship in the Hangar by customising weapons, propulsion systems and armour. Creative types will further enjoy building a ship from scratch with the Ship Editor and then testing it out in combat on a custom level they've built with the Level Editor. To defend the Hangar, players must use the Wii Remote like an anti-aircraft turret to shoot down enemies attacking from all angles. Finally, the game's 2-player cooperative mode lets players work together to blast enemies, fuse debris to grow their ships and finish the mission as a team. [download Tumiki Fighters, strategy guide]

I hope the new one is just that extra hair easier so I can beat the end boss. XD

Wow, Kenta Cho goes commercial! Or at least somebody's taking the game that way. Is he working on this at all?

I think Kenta Cho sold the concept. He doesn't seem to have anything to do with this one...
Still looking forward:-)

Hope against hope, though...