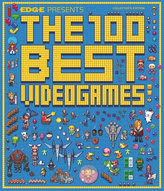 Edge Magazine have recently published yet another of those ever wonderful gaming lists that allege to cover the best games ever made. Ignoring the fact that once again we're being asked to hand over ten of your English pounds in exchange for a list of games which you could write on the back of a beermat without opening the magazine itself... I'm left wondering just how accurate these lists really are.

Is it still the case that as good as it is, Ocarina Of Time is The Best Game Ever Made or is it just so terminally dull and predictable a choice that it ends up there because, well, thats just how these lists work? No thought, no imagination, no heart and no soul.

Colour me unconvinced that if the readers of this blog were to vote on their best games we'd see such a tired and predictable list. So, putting the arguments of how useless lists like this are - I reckon we should show them how a real list would look.

How about you fire me over your top 10 best ever games, and by that - they can be freeware, commercial, shareware, remakes, public domain, console games, arcade games... whatever your list would actually contain and in a few weeks I'll collate all the info together, add them all up and post them onto the internet for everyone to pick over? Don't just throw something in because you feel duty bound that it should be there, put it in because you believe wholeheartedly that this is one of the best games you've ever played.

Drop me a mail at remakes100 AT gmail DOT com and lets set this place on fire...

The problem is not that the list is incorrect - we really don't need those lists altogether.

It should be fun to do it anyway. I shall send an e-mail as soon as I round the games I've played down to the best 10 or so.

I'm more interested in finding out just how accurate these "peoples polls" really are and having a bit of a poke and laugh into the bargain.

Nice idea - at the very least, it should give us a good idea what kinda games the indie community likes as opposed to gamers at large. I've just sent an email.

I'm getting in the habit of ignoring any list that puts Ocarina of Time anywhere in the top fifty never mine first place. Can't stand bout half the other games in the top ten either.

Wow, this place is becoming the new voodoo extreme. Apparently all you need to run a blog is some free time and lots of snark. Maybe next month, Edge will run an article about how crappy your top ten lists are.

btw, what in the world does this have to do with indy gaming? Between this article, the article about Squidie shutting down his site, and the article about the Street Fighter remake, I really have to wonder what you guys are thinking. Are you trying to increase your readership by shitting all over other peoples work?

I think the whole point is to bring the more obscure/"sleeper" games into the light for people to discuss.

The problem with these lists is that the top games generally appeal to the most people at the most basic level, which is why I'm guessing Cave Story would be at least top 10 (since it's essentially a twitch platform-shooter).

What I would actually like to see are games that are top quality with questionable mass-appeal (in alphabetical order):

Ian, whilst Edge is certainly the catalyst for me kicking this off and I can't deny I have a bit of a cruel streak with regards to these things - all the lists that come out of most sites and magazines are generic and derivative of each other.

Aside from the questionable methodology of how they got to the results (readers poll+industry insiders then Edge editorial staff) thats pretty much where the digs at Edge stop for me.

What does this have to do with indie gaming? Because I truly, sincerely believe that if we're going to take gaming history as a whole then that has to encompass everything that comes with over 30 years of gaming history. And these lists with incredibly scant exception never figure nor factor Indie games into the equation.

Yet, at least one of my own personal top 10 features an Indie title, and I'm convinced I'm not alone on this. Sure, the results are going to be swayed a tad asking an Indie news blog and the RR community but judging by whats landed so far - there's a fair spread of stuff from 8 bit titles, indie games and full blown megadollar commercial stuff.

The aim of this list really, is to see if we can get a list together thats inclusive, unfiltered and representative of the world outside of Edge and IGN - and have a bit of fun, generate some promotion and a bit of buzz hopefully for some games that wouldn't normally sneak into these lists.

Already I've seen some wonderful non mainstream stuff creeping in and the results up to now aren't anything I could have laid money on.

I might be blinkered and blind being its my idea to kickstart this, but if nothing else - it'll present an interesting read at the end of it all and a bit of insight into what we like as a community.

The same with Mario Bros and all overmarketing products, anyone remember Pacman?.. yes, the game of the year even when it's repetitive, dummy and lack on graphics but was considered the king for many years.

Any "the best games.." list must be created thinking in the features not in the "the first game that i remember" (cause usually are trash).

It might be enlightening to compare this with the American Film Institute's equally inane Top 100 Lists, the latest one of which was just released to what seems like near-universal disdain from hardcore film buffs. I think Roger Ebert has a point:

"In the aftermath of the first list, issued in 1998, I received enough complaints about missing titles to supply two or three more lists. No doubt most of those 1,500 experts are themselves dismayed by titles that did and didn't make the cut. But such lists serve two functions: (1) The television special makes money for the American Film Institute, which is a noble and useful institution, and (2) some kid somewhere is gonna rent 'Citizen Kane' and have the same kind of epiphany I had when I first saw it as a teenager."

In other words, yeah, it's stupid and excludes many, many far more potentially interesting titles, but hey, it might get someone to track down Rez or Grim Fandango.

Also, you think Western lists are stupid? Check out what happens when the Japanese Famitsu readership gets to vote on the greatest games of all time. I hope you like the JRPGs.

I think you need to see this list as not someone's personal top 100, but a general top 100 which as many people as possibly would agree with.

To give an example, you might have heard of last.fm, a website that lets people track the music they (and others) listen to. There is a group called "eclectic music tastes" or similar, in fact there's a whole bunch of groups with eclectic in the name, guess what almost all have in common. Usually Beatles, Rolling Stones, Red Hot Chili Peppers, The White Stripes and the likes are at the top of most listened artists by the people in those groups.

Well, I just picked this issue up. Some things to note: