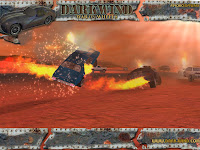 Set in a madmax style world, Darkwind is a turn-based MMOG which fills the niche created by Steve Jackson's board-game Carwars back in the heady days of the 1980s.

The player hires a gang of characters who can unleash death and destruction from behind the wheel of a car. Vehicles include tricked-out muscle cars, armoured sports cars and hearses with mounted flamethrowers - plus motorcycles and character movement on foot will be available soon as well.

Hired characters must be fed and paid. Money can be earned in races, deathrace leagues, via jobs from NPCs or from scouting for pirates in the wastelands between cities, alone or in squads with other gangs.

The game advances in real time; travel, healing, training and car modification takes time to complete, giving rise to a sense of realism often not often found in other games. Gameplay is split between a browser for gang management/world movement and a Torque-based game engine with physics simulations for playing out events.