Friday, November 23, 2007
Metanet Interview
Raigan and Mare of Metanet Software are the latest perpetrators to be interrogated in this criminal investigation series - The Law of Physics, Don't Break it Folks. (mugshot by Edmund McMillen)

First things first - an introduction of yourselves.

R: Also, I will take over typing since Mare hates my weird ergo-keyboard.

We're in Toronto, it's snowing finally. Our hobbies include: playing video games. And reading video game blogs and manuals.


Since N is making an appearance on a couple of consoles and handheld platforms, can you give us a summary of what's coming on where?


One version of N+ will be out for Xbox360 Live Arcade, we worked very closely with the developer Nick (in Vancouver) and did all the levels, it is definitely exactly how we would have wanted it to be: pretty much N, on Xbox.


Will you be posting a couple of preview videos for N+?


We have a video, but we aren't allowed to post it until Microsoft says its okay. The handheld versions are a totally different project, possibly we should have chosen different names.. and they're not done yet - the XBLA one is done, it's just going through final certification.


Will there ever be a proper sequel to N? With blood and stuff.


Well, maybe. So far, a lot of the stuff we wanted to do in N but ran out of time for is making its way into Robotology anyway.. and there IS blood! (in N)


Nope - that sounds like a different game. maybe involving pirates.. One thing is that it's apparently really hard to write a platformer AI that will properly run around and chase you..


So technically, is Robotology a sequel to N then?


It's a sequel in the same sense that a music groups second album could be seen as a sequel to their first. So, not really.. it just doesn't seem like it counts.


Will it have enemies? I should probably say the ones with smart AI or something..


It will have enemies. We have a plan for the AI, but it remains to be seen just how smart they'll be. However, they WILL be robots..


There's a myth being spread around, one that states indie game developers who made it big time drive big cars. Let's kill this notion by finding out if you've changed cars since you've formed Metanet..


I don't even have a license. Mare does drive, but has no car.. we've tried zipcars though.


It's like shared rental cars sort of.. also, we haven't yet made it big - so far we actually haven't made any money at all.. so, provided N+ sells, THEN we might get a car! If we do get one, it will be one of these.


Did you lose money then? And how much?


No, but we do web programming contracts to subsidize game development. This year we're up $500, the past two years we posted a loss of a few hundred. So, we're 'even'.


ok, what are your thoughts about the indie scene - since both of you are not only actively involved, you keep yourselves informed as well.


Part of being informed is simply our tendency to slack by obsessively reading blogs..


..and doing interviews, I'm sure. Those bloody journalists.


meh, we can spare time. Sometimes it's nice to do interviews because they get you to actually think about things beyond making games. One thing about being 'involved' in the community is just that we really like indie games, the only reason we started making games was that we liked so many freeware games, they were sort of taunting us into making one.

There are just a lot of good indie games around, it's fun to find out about them. Also, now that we've finally made a game, it's good to keep up on what other people are doing.


Since both of you are judging IGF - what have you guys played? What do you think of this year's crop? Anything you want to see do a clean sweep at the finals?


Last year, Raigan spent all of October doing nothing but playing IGF games.. I think 80 or 90 were judged. This year.. one sec, we'll check the folder.

This year is tough because there are no big 'stand outs' but many 'very good' games.. for instance: Gish 2, World of Goo, Cortex Command, Clean Asia, and Crayon Physics. Also, Raigan played DROD and Polychromatic Funk Monkey WAYY too long.


Tried out DROD: The City Beneath yet? Can you believe they use the same scam?

The one where when you attempt to exit the game, and their bloody salesman will try and convince you to buy DROD.

Yeah, that is in our feedback already. PCFM pops open the author's website.. but the game's free anyway, Still, annoying.

Very. I dont know why they never put an impossible puzzle in, and post the solution on their website.

Sumo is noteworthy in that it's very similar to the gamejam "waiting for godot" game, and also last year's entry "press the spacebar 2000".. you can't tell if they're extremely clever satire of the current state of gaming, some sort of mockery or statement about the IGF, or just really boring. Rigs of Rods is awesome, but it's also not really a game...


Any upcoming indie games you're excited about? Name a couple of developers who you'd pay serious money for, just to have them release another game.

Pixel. We'd say Chronic Logic or Jon (Everyday Shooter), but we know they're both already making new games, so we'll keep our money. ;)

R: I would LOVE to see DoomRL on DS, with Derek Yu's tileset.


What do you think of the idea, buying Pixel (Cave Story) a DS? I thought the money should be given to him instead to spend as he likes.

Pixel's Japanese though, right? Doesn't it rain DSes there? We were just there for the first time in September, it's a different culture with regards to tips and stuff, I don't know if donations would be well received.

He was quite against the idea at first, but you know these Cave Story fans. 'Cave Story rip-off!'

You mean The Underside?

Yeah, The Underside. And every other platformer made after Cave Story. Seriously, La-Mulana is better. ok, kidding about that haha..

The thing about that is, remember when there were dozens of 'Doom rip-offs'? Now there aren't any, there are just lots of FPSs.

I dont know why indie game developers bother making 3d FPSs. There are always a hundred of them in IGF every year. The schools are teaching these kids the wrong thing.

Are there? Narbacular Drop was worth it! Well, it's easier probably since the problems are all solved, so you can schedule/etc properly.

Really? Why not? There's no shooting?

No killing. And no shooting, Just lanching portals into thin air.

That's an interesting idea, a non-lethal FPS. No wait, you totally shoot them out of the end of a gun. They even call it a gun in the song!

But that's to appeal to the FPS crowd, we all know that.

Well, it does work as a metaphor. I guess you could be a magician who summons portals out of thin air..


Any other IGF games which piqued your interest?


um, other IGF games.. Hammerfall is a lot like 'Rag Doll Kung Fu' in that it seems like a super-fun concept, but in practise it leads to repetitive stress injuries. Clean Asia should really win something, but sadly it probably won't since it's really hard and looks weird.

oh, Jon (Queasy Games) brought his PS3 over the day - PixelJunk Racers is AMAZING. Just the concept of taking a super-simple game, and making a bunch of minigames using the one game as a template, changing some small rules.. totally cool.


Last question, the customary one. Screenshots? Or a picture of something cool.

Take your time. As long as it's juicy I'll wait forever for it. ;)

It's good, we were cleaning out the office and we found papers from when we were making N. It's our initial design doc! 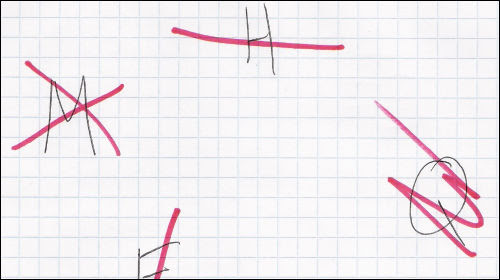 Hell yeah! I can't wait for Robotology, I'm familiar with a 2d game from the SNES that was only released in Japan and used a grapple mechanic to some interesting depth, I'm not sure if that's what they're still doing but either way, the name is promising.

Tim seemed a bit more "alive" in this interview, expressing opinions and all, interesting change from the other interviews where the questions were more basic. More like this!

I actually have never played N, sadly -- just watched a bunch of YouTube videos on it, which look nice.

Both Raigan and Mare replied, so this particular chat is slightly longer and a bit more 'alive', as you termed. There's a lot of editing to be done if the alternate question and answer format is to be followed, so I just pasted the entire thing up.

I'd like to do Metanet every week but their schedule is really packed, and every minute I take away from them means one minute less spent on developing Robotology.

So many interviews lately.

P.S. Mare and Raigan, you guys should change your name to Meatnet. Because that's how I read it sometimes.
Post a Comment
<< Home
Recent Comments
Recommendations