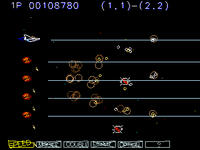 Let's do a Gradius tribute! First up, Cavadius is a one level trial edition. The only difference is that the gameplay has been changed into a vertical scrolling shooter. Also there seems to be a lot of bullets in this one.

Next up is Monadius. It's pretty much the same as the original, if you don't count the fact that everything in the game is drawn using vector graphics.

Both can actually be played in full screen. Cavadius requires the use of the F4 key, while a command-line option can be used for Monadius.

Contrary to belief, Kenta Cho is not the father of shmups.