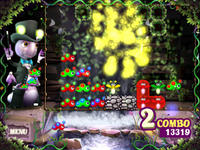 Glow Worm by Flashbang Studios is a matching game that plays a little like one of the Puyo Puyo series. Linking up four glow worms of the same color will turn them into fireflies, and combos can be racked up for bonus points by placing them strategically on the playing field.