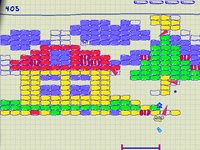 PaperBall is a BreakOut clone that has a certain distinctive style probably best described as 'hand-drawn'. Graphics may look like it was done by an amateur but I assure you it is not. Sprite animation is smooth, which isn't evident from the screenshots.

Like in any other paddle game, the objective of PaperBall is to bounce a ball off your bat and keep it away from the bottom edge of the screen. Use the ball to destroy all the bricks in each level to progress to the next.

All sorts of collectibles can be found by busting certain bricks. Power-ups include those that will expand or shrink the paddle, guns, homing missiles, and multi-balls. There is also a power-up that draws a line for each of your ball's trajectory.

The game does have some drawbacks. Some levels can be finished in a matter of seconds, although it happens less frequently on higher difficulty levels.

To it's credit, the developer has implemented a feature not seen in most games. You can skip any level should you choose to do so by selecting the skip feature from the pause menu. E-giraffa should also be commended for providing a demo on the site that does not expire, although you can only play eleven levels. A welcome change, indeed.

Another undocumented feature of the game is the ability to switch tracks at any time by pressing the 'M' key. There are four tracks to select from. The full version features 120 levels categorized into eight themes but both includes a level editor.

Verdict? Yes, it is fun. And no, it won't provide much of a challenge. But the demo is not time-trial based, so you have nothing to lose by trying it out.