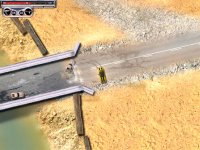 Mexican Motor Mafia is a great top-down action shooter that is very similar to the driving section of Grand Theft Auto. The story begins with the escape of a deathrow inmate, who leads his gang on a quest for revenge by first killing the local law enforcer and then proceeding to kidnap his kids. What they didn't know was that the sheriff was the protagonist's brother, and it's up to you to guide him in his search for the murderer and his cohorts.

Arrow keys control the speed and travel direction of your ride, while the mouse is used to aim your shots. Carry out jobs for shady NPCs to earn some money, which you can use later to upgrade weapons or change the entire car for a new one. Trading can also be done with stolen goods to supplement your side income.