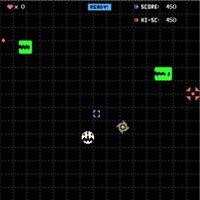 Niga is a decent mini-game by Comet Mistake that could be described as an old-school Robotron: 2084. Use the mouse to shoot and arrow keys to move the character around.

The first two levels may seem a little easy, but more enemies are introduced as you progress such as those that will shoot back or chase after the Pac-Man look-alike. There's no rapid fire, so some dodging is required if you happen to miss often because only one of your bullet can remain on screen at any time.

Do avoid the edges of the playing field because enemies tend to appear from those places. The game includes a high score feature to keep track of your best achievements. Great use of minimal graphics, and strangely addictive as well.