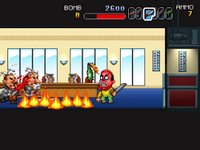 I'm O.K. is an effort which came about after a couple of designers had read Jack Thompson's proposal for a violent videogame as a charity benefit. Based on the draft that Thompson had written, the story of Osaki Kim (O.K.) can now be experienced by gamers around the world courtesy of Thompsonsoft.

Players get to control O.K. as he seeks vengeance for the death of his son by annihilating every single game designer alive. Gameplay is similar to SNK's Metal Slug series, with the violence taken to an extreme level.

The list of usable weapons include uzis, shotguns, rocket launchers, machetes, molotov cocktails and a baseball bat. Weapons can be purchased from a shop at the end of each stage. To purchase items, the player has to earn coins in the bonus stage by shooting at shop customers.

There's a lot of references to classic games of yesteryear which are fun to spot, though none will be revealed here for fear of spoiling the playing experience. Graphics do not disappoint, which isn't much of a surprise considering that Derek Yu of Eternal Daughter fame is the team's lead sprite artist.

Is there a copy of the game available on another site?