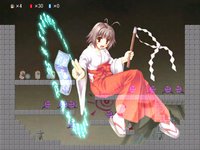 Mikomiko is a platformer by Shindenken featuring an interesting attack system based on swinging a talismanic stick to exorcise ghosts.

By pressing the Z and X key to swing the stick, it's momentum can be used to ward off evil spirits and cause damage in the process. Only the tail end of the stick has any effect on the enemies.

You can break certain objects to collect red charms, then throw them at enemies by tapping the C key. The charms will attach themselves to whatever they come in contact with, and explode a few seconds after deployment to cause injury or break some walls. Rare blue charms can be thrown by pressing the V key.

The 70MB trial version is pretty short considering that there's only five stages to work through, plus the gameplay itself isn't exactly revolutionary.