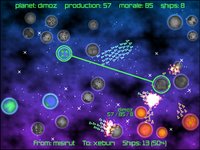 According to philhassey, Galcon 2006 is a remake of an old DOS game. Imagine that you could send ships from Earth to populate other planets. Left click on a planet which your soldiers are currently occupying, then click again on a destination to initiate an invasion. Colonized celestial bodies appear on the star map in a bluish hue instead of the original gray.

Aliens from Mars can do the same as well, sending their fleet to invade other planets. Both humans and Martians engage in a race to conquest the stars and total domination or slavery.

Grey planets will put up a fight before submitting to a large force. Ships are automatically replenished, and the rate at which they are produced depends on the size of each planet.

this one's quite addicting. it bugs me a bit, that there's no highscore table or final statisics in any way (like "planets taken" or "ships built/destroyed"), just an uninspiring "good job!" which is not enough to make me proud of my galactic crusade... A perfect game for lunch break, though.

I agree. This one has its flaws, but is a great timewaster. The interface is annoying, though. I would have used the left mouse button to select planets and the right to send, thus avoiding the annoying one-click-too-many issue.

Phil let me in on the beta (it has been officially released now). I've been playing this lately, and there are quite a few upgrades just in the past month (let alone since ludum dare). For example, there is now a highscore table now as well as a ranking system.
official galcon home page
Post a Comment
<< Home
Recent Comments
Recommendations