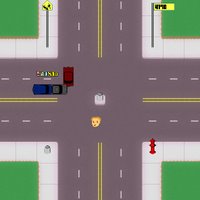 Jaywalker: Take Back the Streets is the sequel to dessgeega's original release, featuring updated graphics and a new soundtrack to accompany your bloodthirsty quest for revenge.

Gameplay is essentially the same. Jump in front of a car to make it swerve, hopefully causing it to crash into another object for major points. Chain car crashes to score a multiplier bonus. Hummers and vehicles with spoilers will not attempt to avoid a collision with the protagonist.

I liked the original Jaywalker, but don't like this one quite as much.

For one thing, it seems to lag lots in the menus. Perhaps it's just my computer, but it's pretty unacceptable for such a simple game. The directx support causing it, perhaps?

I also wish there was a music free version as I don't like the tracks included and it just bloats the file size.

I also miss the second mode that was available in the original version, which picked up the pace of the game quicker (it was random, wasnt it?) because it just takes too long to get going in standard mode.

dess mentioned that the music can be turned off by pressing the S key. not too sure about the second mode in this version though...

probably the same method would work? (hold shift for about five seconds at the start menu)