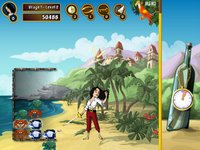 Bounty Special Edition is the latest release from Total Eclipse Games, developer of the upcoming Zorban's Quest and Academy of Magic. At it's core is an epic story line, chronicling the protagonist's adventure using cutscenes spanning 86 pages long in total.

In each level, tiles of the same type have to be pushed to the bottom row for it to be considered a match. Pieces in the reception row that do not match will be moved upwards. Much like Tetris, no tile must cross the top border line.

Special items such as those that allow pieces to be swapped, wildcards and extra time are among the few which can be collected and activated immediately or stored for later use. In production for nearly a year, the game also offers a hundred and forty levels plus two other game modes besides campaign.

Gee this is a game with excellent graphics, totally awesome production values, and gameplay that will bore you after the first level... They need to keep the comics, artwork, and production values and conduct a game transplant....
Post a Comment
<< Home
Recent Comments
Recommendations