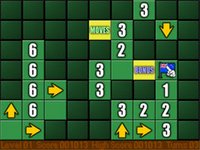 Flag is a remake of an old Amiga game called Flag Catcher. Your objective is to find a single hidden flag in each level by overturning as little tiles as possible.

Only a number of moves are allowed in order to impose some form of difficulty on the player. The task is made slightly easier with pointers such as number squares to indicate the distance of the flag from your current guess, or arrows to show the flag's general direction. Uncovering bombs will reset all squares to a condition before any were flipped over.

Collect the moves special item to increase the number of moves you have remaining. Later levels will contain more bombs, but less clues and allowed moves.