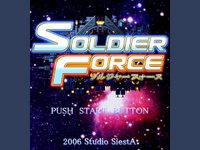 it is a joy to play a shooter that rewards me for something as straightforward as shooting enemies. if the title of studio siesta's soldier force didn't tip you off, the caesar and the star brain are a blatant admission that the game was conceived as a star soldier remake. it doesn't aspire to be much more, but fortunately it is very faithful to hudson's benchmark shooting game. everything you'd expect is in there. 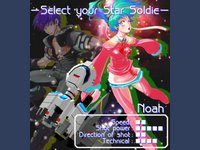 if you're not sure what to expect: star soldier is a score-oriented famicom shooter, the first in its series. the focus of play is on clearing waves of enemies, and as fast as possible - the faster you finish them, the bigger a bonus you get and the faster the next wave appears. there are other hidden bonuses for crafty players, like destroying a mid-boss before it finishes forming or destroying two stone eyes simultaneously, which depend on your ability to collect and maintain power-ups, and the uncovering and shooting of hidden Z tiles for ever-larger point sums. 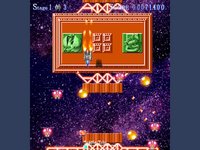 these are all faithfully reproduced in siesta's remake—you can even hide under terrain as in the original, only now your craft actually disappears under the cover. so what else is different? the power-up smart bomb changes enemies to orbs that give more points. there's an overdrive meter called the "soldier trip", which (when charged all the way) fully powers-up your craft instantly. it really helps to keep the momentum of the game. also, autofire, at last. 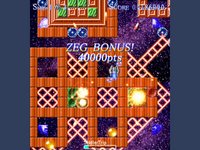 the biggest change is that you now have two starcraft to choose from. the caesar controls like you'd expect it to, and if you choose it the star soldier theme will play for you (and the caesar theme when you power-up). the other craft is the "noah", which has positionable weapons (in addition to a fixed forward shot). scoring bonuses with the noah is trickier, but surviving seems easier. while you pilot the noah you'll get to hear original music. 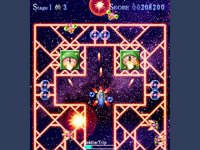 so here's a lingering question: how to justify a doujin remake of star soldier when hudson themselves released their own not too long ago (first for gamecube and playstation 2, then for the psp)? i think the answer is that hudson's is not a straight remake, but more of an attempt to bring star soldier closer to a modern shooter, with boss parades and bullet curtains. soldier force on the other hand is a dedicated recreation of the famicom original: at the end of each stage it's a star brain you'll face, and if you don't kill it in time you'll have to repeat the stage. losing your ship means you'll have to start over from some ways back. siesta did add notation of the bonuses you earn, and autofire - conspicuously absent from hudson's release.

there is much for a star soldier fan to love in soldier force. there's no demo as of yet, but the game is carried at himeya shop. if you're a fan of the original, or would like to play a shooter whose focus is on shooting rather than dodging, soldier force may be worth the purchase.

thank you for this nice review.
feeling well informed :)

Picking this one up now. Looks excellent.

Hello. Just wanted to let you know that Soldier Force has been given a significant update (1.20). 2 new ships, including the one from Star Force... complete with remade music. The ship selection screen has been given a facelift as well.
Post a Comment
<< Home
Recent Comments
Recommendations