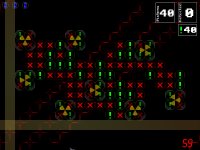 Ac!dbomb is the latest release from Mr. Chubigans, developer of Vivid Conceptions and Sandbox of God. The game has bomb defusing elements from Metal Gear Ac!d 2, in which you race against time to uncover the pistons hidden behind the tiles.

The current build features only three levels, but more will be included when the full version is released this August.