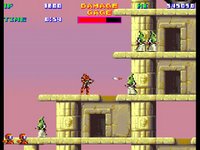 Xain D Sleena is an excellent platformer remake by X-Out, developer of the equally impressive Prototype. You assume the role of a soldier with a mission to save each of the five planets invaded by the enemy forces.

Each location consists of two equal parts. You have to fight your way to the enemy base station, detonate it and leave on your ship. The escape is basically a horizontal shooter stage with a boss in the last planet.

Plenty of options to tweak such as autofire, difficulty and image quality. Having to restart from a save point after losing all health may discourage a few players from playing much but fans of the original will cherish this remake.

Thanks for the review and kind words :)
Addmitedly, Xain is not to everyones taste. But I had a lot of fun re-making this classic!
X-0ut

I loved the original but this version crashes just after opening for me. Ive had to reboot on every attempt. =(

Try setting Quality = 0 in the engine.cfg (open with notepad)
If that dont help, let me know your system specs and I'll see what I can do.

OH MY GOD!!! I used to pump loads of money into this in the arcade, can't believe I found it here :)
Post a Comment
<< Home
Recent Comments
Recommendations