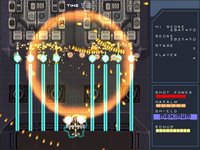 Think Under Defeat, but with 2D sprites. Demolition Gunner: In Search and Destroy was originally developed for a three minute gameplay competition, then turned into a complete production featuring seven stages and obligatory boss encounters.

These battles last only twenty seconds each, so there won't be much of a struggle beating them assuming that you're good at dodging an insane number of bullets. Press the Z key to shoot, or hold the X key for a few seconds before releasing the button to launch a napalm bomb. Click on the first link after the title to download.