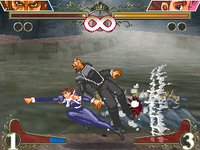 Takase's Dot Fighters is an impressive work, though there is less to admire in his debut effort. Arm Joe features inconsistent sprite design and unbalanced gameplay issues, among other glaring problems. Certain characters depend on slide moves to win, while others have a special attack that could drain the entire life gauge in mere seconds.

The final boss is impossible to beat, which is understandable since by using Judgment a player can actually complete the game by pressing a single button repeatedly. No timing or directional keys required even.

Broken? Yes. But it's still fun and silly enough to download and keep.

Overrated? Somewhat. In the sense that it usually gets sympathy points for being created by one guy, being non professional work, and most of all, being free.

However, this isn't really a game that should be taken so seriously that it loses merit due to gameplay issues, in my opinion. I personally like to think of ArmJoe more as a parody of fighting games: over the top super moves, incredibly difficult boss, and the very obvious references to other games make it hard for me to think otherwise. Overall, including the graphics (which I thought were great, and consistent), music (repetitive, but funky), and gameplay (broken, but not unplayable) add up to at least a 5.5 - 6/10 game. Better than average.

On a side AJ note, I actually started making a combo video that I plan to complete now that I have a new computer that can probably handle some video editing. It'll properly show off the pure hilarity that can be pulled off with some of these characters.

I agree, though I'd rate it slightly higher than a six. :)

If you record any, I'll make a mention of it in the news section!

Judgement isn't that hard. The main thing you have to look out for is his auto-attack that kicks in when he's getting up from a knockdown. You can actually beat him with perfects if you are using a character who has long range attacks.

I thought he was only available in multiplayer.

I loved arm joe, it was great. The sheer inbalance was kinda fun as you get to figure out every characters rigged parts and exploit them or try and beat them. Likewise, the effort put into it in verything except balance is absolutely incredible. I played it for about 1 hour and had a blast, I think its only meant to played for an hour or two. I can say the same about dot fighters, although you may spend some more time making up combos.

you guys know its based off Les Miserables, right? its actually a parody of an unsuccessful japanese film version called A Mujo, which was cancelled after 2 of 4 parts. So it is intended as 100% parody.
Post a Comment
<< Home
Recent Comments
Recommendations