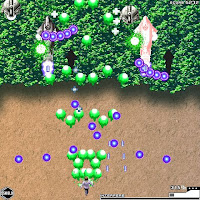 Asougi is a freeware vertical shooter that resembles ESP Ra.De., a Cave arcade favorite featuring characters with the ability to fly and amazing psychic powers.

Some of the bullet patterns are rather unique and not the sort commonly found in recent shmup releases. It's also rather friendly to beginners as the number of continues are set to unlimited, though progress past stage three is only allowed to players using three credits or less.

The executable file with a longer name is the version with less effects for slower computers. Click here for the direct download link.