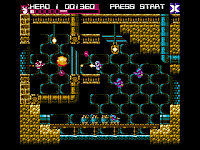 Wolverine releases a new screenshot from the sequel to Hero, a work in progress.

Finalists for the 2007 Slamdance Guerrilla Gamemaker Competition have been announced.

Hey, it's Wolverine here. Thanks for featuring a bit about my game there again but could ya just change the word remake to 'sequel'. Like I said on the RR forums I still haven't decided on a lil subtitle for it. Thanks again! :)

Hahahahaha! I was just about to post here to say "Wasn't that HERO game a remake, not a sequel?"