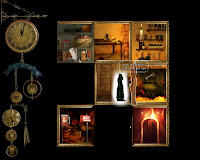 Vince Twelve gets interviewed by Gnome.

New screenshot added to the Legend of the Lost Jewel forum thread.

Buster mentions (along with a new long-term project at work) that Mini01 is to be the first of a monthly game series. Post translated by Shih Tzu. (thanks!)

Here's a bit of update on the current situation troubling Home of the Underdogs.

As of January 2007, the site has not been updated for a year. In a blog entry from November 2006, she has informed readers that she has written several reviews for games (over twenty), but that she has been waiting for the new wiki system before updating. But because of delays with the wiki system, she writes that she plans to update the site manually before the year-end. However, that has not happened as of January 2007.

Is Danny Ledonne also in charge of this game? No mistake?
Post a Comment
<< Home
Recent Comments
Recommendations