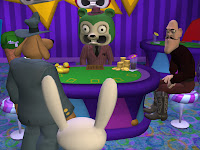 Reviewed by the Gnome (Gnome's Lair)

Ahh, episodic gaming, point-and-click fun, lovely absurdism and an exercise in alliteration. You just got to love the newest (can you believe it’s the third one released, already?) Sam and Max Episode: The Mole, the Mob and the Meatball. It’s funny, it’s well directed, it’s excellently written, it’s self-contained, it’s slightly psychotic, it must definitely be the cheapest just-released game in whole wide web and it’s the sole proof mankind ever needed to prove how perky and alive adventure gaming still is.

Then again, it’s also far too easy and quite a bit on the short side, but guess I can live with these things. Especially when this is the only Sam and Max game ever to feature a hilarious, brilliant and jazzy Mafia song. Oh, and admittedly it does feature a whack-the-rat style minigame that’ll make Hit the Road veterans cry. And a great driving mini-game. And an amazing variety of puzzle types, which might not be tough, but are always entertaining.

Anyway, back to the Mafia as, well, it’s quite central to the plot, for it’s the Mafia and Ted E. Bear’s Mafia-Free Playland and Casino you’ll be unleashing the investigating duo upon. In a search of a mole no less. Still, that’s all you’re getting out of me… Them Spoiler-dudes have already given me two warnings… I’m confident there won’t be a third.

My lips are sealed. You, on the other hand, have to play this game. Now. It will hit worldwide audiences at the 8th of February.

Name: Sam and Max Episode: The Mole, the Mob and the Meatball
Developer: Telltale Games
Category: Adventure
Posted at 1:18 AM by Tim
post a comment  |  1 comments

unfortunately i don't own a credit card. i guess i have to wait till it's released in a box :(
Post a Comment
<< Home
Recent Comments
Recommendations