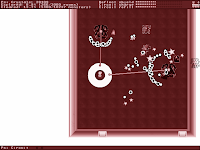 Meritous is an action-RPG dungeon crawl.

Pros: The map graphics and user interface are impressive, I liked the colors. The attacking system is easy and simple -- there's no real aiming -- and it works. The upgrading system is fun. The dungeon is massive; I played for about an hour and only explored about 100 of the 3000 (!) rooms. The gameplay almost feels like a danmaku game at times: you are avoiding bullets a lot of the time, because you can fire so infrequently. The story seemed well-thought out and the instruction manual is very extensive, with a lot of detail about the background of the game.

Cons: It uses ripped music; I like the selection, but it's not original. The sound effect for the attack shouldn't vary so much in volume, sometimes it's way too loud. The game seemed to have no full screen mode: I run in 1600x1200 resolution so the screen was very small for me. The sprites are too simple, the pixel art techniques used aren't very good; the main character's sprite seems to float and has seemingly no firing animation. The game would benefit from a mini-map visible during play rather than as a separate screen. I wish there were a way to "pull" crystals to you like in the Megaman Legends games, walking over them to collect them gets *very* tiresome. I wish there were more character classes to play as, with different skills. The enemies should have had a greater variety of firing patterns, it'd make it more interesting, although admittedly I didn't get far enough to see all the enemies.

Overall: It's a fun action-based dungeon crawl but with rough edges; if you liked Diablo and are addicted to exploring huge dungeons you'd probably have some fun.

Played this a few weeks back. A couple of notes on the review:

* You later *do* get the ability to pull crystals to you - it's mentioned on the webpage as the Crystal Summoner. If you search out the upgrade rooms, you can get it rather quickly.

* The large dungeon is actually quite a drawback - it looks nice on paper, but by the time you're up to 1000 rooms explored, you'll likely have over half the monsters killed, have seen almost all the (rather small) variety of monsters available, and be able to deal with them all without thinking. Only the bosses cause you to think much after that, and even then you usually have many obstacles to hide behind (that they have *great* difficultly figuring their way around) while your attack can go *through* obstacles.

* Also, from a completionist standpoint, I was disheartened to learn that the Stat Powerups I was finding after clearing treasure rooms increased powerup costs just as buying the powerup would, so to get the best stats, you'd probably need to delay picking them up until the end. Which is annoying, although a minor issue.

Basically, it gets monotonous and easy too quickly, and the dungeon is bland with no real surprises in store, so you're less exploring and more just filling in the automap, especially once you get the Map artifact.

Of course, I'd just played La Mulana prior to this, so that definitely coloured my perception of the game....

If you're a 100% completionist, as I am, then you'll find an artifact item called the Agate Knife that sets your skills to maximum and also offers an alternate ending.

To get this, however, you have to explore every room. Then you get the knife in the last room.

I'm a bit disheartened to see that the original reviewer didn't put enough time into the game to see all the features though, such as the dozen or so different monsters that do, in fact, have largely varying firing patterns.

I apologize for basing the review on a single hour, but, considering how long the game is, it's preferable to have a review based on an hour of play than to have no review I think.

Besides, most reviews on this blog (I believe TimW has told me) are reviewed on the basis of a short time of play or sometimes not played at all, so not finishing a long game to the end isn't that exceptional for this site.

rinku: no reason to apologize, actually. ;)

To be honest, I did finish a lot of indie games (shmups, adventure games, puzzlers etc.), roughly around 70% of them. I'm not too keen about writing reviews though. :D

Hence it's quite surprising to see some of the negative comments here. I know quite a number of people finished Meritous but no one wrote a review for it. It's going to be hard for other people to find out about any indie game if no one talks about them.

I'll post any reviews you guys are willing to send. ;)

Actually, it is possible to run Meritous in fullscreen mode. Pasted from Lancer-X's page:

"You can run meritous.exe with the command-line argument 'fullscreen' to attempt to run the game in fullscreen mode, however this may not work as intended on some systems, due to the way dual palettes (physical and logical) work in SDL."

Thanks TimW, but I'll still try to play games for a longer period of time for my future reviews (or else, review shorter games).

Thanks for the tip on the full screen mode Corwin, I stand corrected and it's nice to know about for when I try the game again -- it still would be better to have it selectable within the game though. But Missing did the same thing (in the opposite way), it has a windowed mode which is only accessible through a command line.