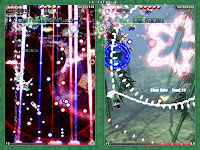 Phantasmagoria of Flower View is a versus type shooter with Reimu, Marisa and Sakuya as initially playable characters, but the list adds on as the player progresses in the storyline. Playing as one of sixteen characters, you must battle your way through nine difficult encounters to uncover the truth behind an unnatural spring season.

The game most resembles Twinkle Star Sprites, where two equally matched characters fight head to head within individual and separate play areas. Upon meeting certain conditions, players are able to unleash a variety of character-specific Spell Attacks upon their opponents in an attempt to whittle down their remaining health points, in a manner not unlike a versus puzzle game such as Puyo Puyo.

ZUN's offering also features a Match Play Mode in which the player may face off against individual AI opponents or compete against other human players, as well as observe AI versus AI matches. With the netplay patch, multiplayer is also possible through LAN or over the Internet, although it has proven to be unstable, at best.