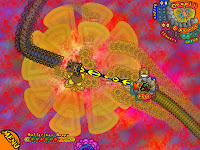 Initially the screenshot itself caught my eye, especially because of my interest in art games. After reading a little more about the concept I was eager to try Blumenmacht (German for "flower power"). What I found is an intriguing twist on the top down shooter model.

The twist is in fact rather substantial in that the game has become largely non-violent. You're no longer actually shooting down enemies, but engaging in a dance which fills the respective "ballerinas" with happiness. Some will undoubtedly be put off by this motif, while I was glad to see a game with such a unique artistic vision.

I found the game to be a little frustrating at first. The amount of visual stimuli can certainly be overwhelming, and it took me many tries to actually figure out what I was doing, despite an in-game tutorial. In a way, this is to be expected with a new or revised game concept. After some time, however, I realized that it was not quite as difficult as I thought it to be initially.

If you bear with it, and learn the ropes, you'll find a very unique, stimulating, and enjoyable experience in Blumenmacht. Granted the game can see some improvements, and many have been suggestion in the forum thread. Yet there is something very good and appealing in its cacophony of colors and additional challenges will continue to present themselves in later levels.

You can also view a gameplay video here, via YouTube.

Blumenmacht sounds very weird and is wrong. Blumenkraft would be equivalent(?) to flowerpower.

"Macht" is indeed translated as "power." Such as "die Macht der Liebe," being "the power of love."

Though "Kraft" is also translated as "power," the implication is along the lines of "energy," (which is also one of its translations). I believe that an insinuated "flower energy" is quite different from the sense given off by the old phrase "flower power."

I suppose that this is more at the discretion of the creator though. It sounded fine to me ^_^, but oh well... ha ha...
Post a Comment
<< Home
Recent Comments
Recommendations