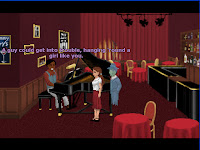 Dave Gilbert's Blackwell Unbound announced. Interestingly, sprites and background art are done by Erin Robinson this time around. Due out next month. [Nanobots announcement, Spooks review]

You can expect to see a chronicling of Robotology, as well as some details on other projects, plus a whole bunch of randomness too. We'll probably review games we like and don't like, and comment on who knows what else. So get ready, in a kind of general and indiscriminate way!

A very early prototype for Robotology can be downloaded from the latest post. [original forum thread]

cly5m (the creator of seiklus) may be working on a new project entitled Avaus, pictured right. As described on the site:

In this game, you'll pilot a ship on a rescue mission in a dream world. This is a pretty large project, and I hope to have it finished in 2007.

Cave Story is a great game, but this is taking it a bit far. Lots upon lots of retail games beat it real hard.

But if that's what the artists feels is what he wants to put his talents to...

If anything, it wasn't the story that made the game good.

(What's the point of being able to delete comments if it still leaves a big paragraph saying I did?)

Of course by doing so, I think the team behind this are subjecting themselves to a really unforgiving fanbase but I wish them the best of luck anyway.

A very talented artist and some brilliant comics. Amazing find. Does feel a bit like Frank Miller meets Grim Fandango though, doesn't it?

the metanet software blog has so not launched yet! It's in development still, and yeah, there are posts that we're preparing, but we haven't officially opened it yet which should be obvious since there are no links to it from anywhere!

thanks for spoiling it though. Nice work. It opens officially tomorrow.

well, at least we managed to delete all of our "test posts" ;)

seriously, who's going around trying random URLs just to see if they work?!

*sigh* Raigan thinks my comment was a bit bitter. I didn't mean it to be as snarky as it perhaps comes off -- we definitely appreciate the enthusiasm, 'cause that rocks, but we're not quiiiiite ready for the blog to be public, so it's not up to our super high standards yet.
Not ready for prime time, as it were. You've caught us with our pants down.
that sort of thing ;)

hell, i'm not even _wearing_ pants.

'cause that's just how Raigan rolls.

I just hope we can capture this sort of incredibly witty and pants-wettingly (or in Raigan's case, chair-wettingly) entertaining banter on the blog. That's my goal!

Raigan and Mare, sorry about posting it a couple days earlier. I should have waited until an official announcement was revealed.

I had not caught any test posts though. :)

Hahaha... I'm more of a gamer who enjoys indie games a bit too much. Not too fond of the journalist tag since I was never one, plus journalists usually don't beat the games they write about. ;)

i don't know, finding the URL was totally investigative journalism!

maybe it was more game-detective work -- following a hunch, hitting the streets to track down a lead.. or something ;)

I'd call it too many adventure games, getting a hint somewhere and digging it out til you've solved the puzzle and then have to cope with/pick the fruits of the effects.

Btw, when you hover over that screenshot (what game's that, btw? Looks pretty cool), it says "Cave Story" ;)

Ahh, sorry. Seems like it's from Blackwell Unbound. The other screenshots look goooood too! Could've been straight from LucasArts

Fixed. Thanks for the correction!

Hehehe, working on it ;) Bit much on my plate lately, so it goes a bit slow (but steady), but the other project's coming along nicely, and if I can keep this rate up, it should all lessen a bit by the second half of next week. Chalk int. isn't coming out so well, though.

it's a bit scary to see those blackwell screenies. it seems art knowledge and professional skill isn't necessary in commercial games anymore. in fact, if this is the new standard, artists will be redundant soon. al emmo really got a lot of flack for it's art, wonder where all the critic's are now. they have a much easier job here.

that Blackwell game looks good. I like the art style a lot and it's been a while since I really got into a graphic adventure game so looking forward to that.

also funny how certain gamemakers like himalaya is targeted by the critics, and other's like dave amd derek your not allowed to say one negative thing. i loved blackwell legacy's sprites, ian is a pro and knows what he is doing, but this is a different story . . . in fact, 60% of freeware games has equal or better graphics.

Where did ya pick the amount of 60% from exactly? You've seen every freeware game available and then calculated a value based on what you yourself thought of the graphics of those games?

I personally judge games on these points:
* Graphics
* Gameplay
* Story (if it's needed)
* Music
* Whole of the game
* Fun
Graphics isn't how many polygons a game has, or how many layers of 3D effects or so. It's a matter of being able to see there's been put effort in the graphics, and it all fits together, so no style-breaks, no animations that seem "out of the room" or such. This is pretty much the selling ticket of a game, so until we can give it a try and check gameplay, story, music, whole of the game (how much everything fits together and creates a certain atmosphere) and how fun the game is, the graphics're what we'll have to go on. They look sweet, like the old LucasArts games. It's a style you don't often see done well.

If you know of games that you think're better, just tell us. Everybody that visits this site's interested in learning about new games, or they wouldn't come here.

to be honest, i don't see anything similar to lucasarts here, except for the resolution maybe. games like monkey island 1-3, the dig and full throttle really had beautifully drawn backgrounds with incredible amount of detail, done by professional artists. i don't really think there are any comparisons to lucasarts here. not in style nor skill nor effort.

i'm not saying the artists are bad, i'm just saying maybe it would be wise to first go and actually study art and art techniques a bit more, just simple things like composition, colour theroy, perspective, layout, anatomy, pixelart techniques for the characters, lighting, those kind of things. things you would expect paid artists to know and be quite good at. i'm just saying that why must some artists go and learn all these stuff while others can just skip it and suddenly be considered commercial as well without taking the time reach that level where we can justify them selling their work.

i dont know how good this game is, but i have confidence in dave, as he has proven himself.

but in terms of JUST graphics, there are quite a few freeware games i would rate above this game, (looking just at graphics!) and many more equal to it.

to mention a few, since you asked:

- apprentice 1
- apprentice 2 (though, sam and max look, especially colours, and even some heavy tintin and asterix reference used)
- out of order
- the white chamber
- cedric and the revolution
- reactor 09
- robotragedy 1 + 2
- the family treasure
- knightsquire
- silent knight 1 + 2 + 3
- prodigal
- principles of evil
- no action jackson
- mind's eye
- enclosure (even though a low resolution, you could see the art background was there)
- eye of a kraken
- permanent daylight
- grr! bearly insane
- sven gordon
- nelly cootalot
- pirate fry 2
- a friend indeed
- stargate adventure
- Emily enough (probably the closest in style to blackwell unbound, yet better sprites)
- automation
- hallway of adventures
- caverns
- cure for common cold
- frank the farmhand 1 + 2
- heartland
- king's quest 1 + 2 + 3
- the great stroke off
- the heist
- two of a kind (dave's game)
- wooly
- what makes you tick

then theres the games still in production,

and yes, you are right, graphics are not about the amount of 3d effects or number of polygons.

I'm glad you like AGI games. It's not often you see one like Enclosure listed in freeware adventure games. There're some there that blatantly beat Blackwell Unbound, both fully finished and in production (and dear god, hopefully not abandoned), but even if they're, and others, are better, that doesn't make Blackwell Unbound bad. It looks really good. Ok, the piano pic has some perspective issues, but that's all. Shading, pixeling, etc. are all very well-done.

To be honest, Pirate Fry 2, Out of Order, the sprites of Two of a Kind and the backgrounds of Permanent Daylight are the dog's poo. Not the least bit effort went in them, and they showed an utter lack of any and all skills. Saying they're done better than Blackwell Unbound is quite nefast for your point.

Dave from Wadjet Eye here. Thanks for all the comments about the graphics. "Blackwell Unbound" is more of a side-project of sorts that I am releasing to tide people over until a bigger project is complete ("Blackwell Convergence").

The simpler artstyle of "Unbound" was a deliberate choice. I was aware that this simpler style could potentially disgruntle some people, so I lowered the price to reflect these changes.

"Unbound" will be released in August, and we're aiming "Blackwell Congergence" to be finished by November. "Convergence" will show a return to the more detailed artstyles of Chris Femo, Ian Schleffier, and our new artist Scott Benson.

I hope this answers your concerns!