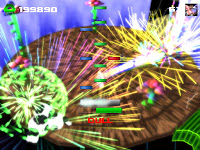 Synaesthete is an arena shooter which attempts to bombard players with a cacophony of sound and images, hence it's not surprising that this DigiPen student project contains a seizure warning as well. The objective of the game is to guide the protagonist from one area to another, though each exit is only made accessible once the entire room is cleared of enemies.

Attacks are initiated by timing the correct key presses to each beat. This is where Synaesthete suffers, because a simple arcade game was unnecessarily turned into a car wreck with complicated control elements - the only letdown of an otherwise impressive team effort. The game is still undergoing changes, so there's a possibility that it's difficulty could be toned down in future releases.

I don't think it suffers from the controls, mostly because you don't have to hit every note. Just choose the colour that looks easiest and hit that one.

Anyone who has trouble with the controls in this has clearly never played a Beatmania game, either.

Seriously, you've only got to worry about 3 note-streams and buttons here. At its highest level, Beamania has 7 + a scratching disk.

I found this version really easy - beat the two levels available without even needing smartbombs. Looking forward to playing more of it later, though!

Greetings, and thanks for reviewing our game!

As AlbeyAmakiir mentioned, you don't actually have to hit every note. We decided against penalizing the player for ignoring notes because...well, because we're already asking that you multitask movement and combat! Also, the two levels in the demo that we've released are mid-to-high difficulty, so rest assured that there will definitely be easier songs that cater to a more casual audience.

I do appreciate the feedback, though. You're not the only person to mention this, and it's definitely something we've considered and worked on addressing as development progresses. We still have two months before we're considering the project finished, and there's still a lot of changes to be made.

Keep your eyes peeled for a new build on the website by Thursday (07/19) evening :)

Flat out the most fun I've had playing an unfinished version of a game before. I loved it.
Post a Comment
<< Home
Recent Comments
Recommendations