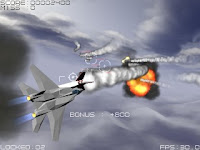 After Burner Climax on D-language is a test project by keim, developer of Nomltest FS, Invisible Vision and Quantized Blaze. Only two keys are used, and though the gameplay is currently a little unbalanced this particular production is already showing plenty of potential in it's early stages.

If his previous achievements are anything to go by, this could end up being a lovely remake indeed.

Hope it's more fun than the original Afterburner which I always found to be a really bland, shallow, and boring game once you get past the smooth '3d' effect of the graphics.
Post a Comment
<< Home
Recent Comments
Recommendations