Thursday, June 21, 2007
CPS3 Emulated
The first CPS3 arcade system board debuted in 1996 with Warzard (known as Red Earth outside Japan), and more than ten years later the encryption that prevented MAME from running CPS3 ROMs were finally circumvented by Andreas Naive. Haze (David Haywood) then quickly went to work on the emulation, with all of their current progress documented on this page. 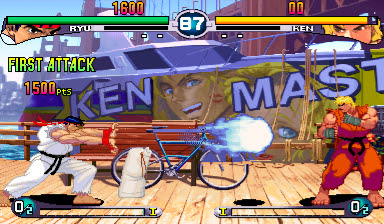 Games that were running on the CPS-3 board are as follows:

Owners of defunct CPS-III arcade system boards or scratched Dreamcast discs now have an additional option to relive these Capcom classics.
Posted at 2:08 AM by lemeza
post a comment  |  8 comments

News of the year! Time to celebrate!

Well I already have everything on DC cept for the never released Warzard so this is still good news.

This is quite some news... many people (including myself) have been waiting for this quite some time.
Sure this news will cause a fair few internet ripples :]

Just ran a couple. Still plenty bits to get done but very impressive work and they are for the most part playable and smooth. Lovely graphics of course (those that are displaying correctly :P )

Thanks to Tim for th news.
And thanks to the anonymous guy for the links..

Thanks to all the guys behind emulators and dump-roms, they didn't let this game dies or simply disappear in some trash dump, and f_ck to the game companies which did nothing to preserve this gems from oblivion.. they just sold to us now after year of guilty absence.

Rock on guys, rock on.
Ciao.

You shouldn't be posting links to the roms dude. Use some common sense.

YOu know, if you searcha round a bit you can find "sf33usa.bin". Simply put that in teh right zip file and the game plays with no problem