Friday, June 22, 2007
New Bloodlust Software Game
The artist for all of Bloodlust Software releases in the past is working on a new AGS adventure game under a new banner, Gnarled Scar Manipulations. As explained by the developer of The Knobbly Crook:

You play as O'Sirus the Snip, a simple paper farmer who realizes he is connected to something much bigger. He'll struggle to join the Royal Guffaloon, the Crookian warrior police, he'll end up in the massive stronghold of the Bogold Empire, and eventually he'll be on the front lines of a huge war. I can't hide the rock, paper, scissors theme with my screenshots, so I'll say it has a big part of the way things work in the Knobbly Crook. Magic takes many strange forms, and O'Sirus controls those three elements (Tic is his paper bird).

A short one room demo is available for download. 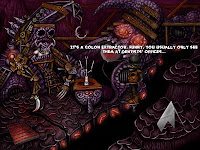 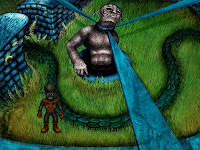