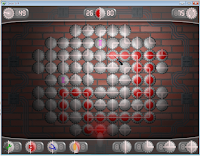 Ice Breaker is a pretty interesting and polished puzzle game created for the Game Maker winter games contest; it's one of the best entries for that contest that I've played so far. It has to do with maintaining a colored line of power by rotating nodes, eventually coloring the entire puzzle red. There are a number of levels and special items and other variations to keep it interesting. In feeling and atmosphere (but not in gameplay) it's similar to the Ac!dbomb series, so it's recommended for fans of those games.

This looks like a puzzle from the game "Safecracker." I'm not trying to slam it - Good for him if he can add an extra bell or whistle to it to make an entire game out of it but just don't say that the game design was divinely inspired. Been done before.
Post a Comment
<< Home
Recent Comments
Recommendations