Sunday, November 25, 2007
Konjak Interview
An interview with the creator of the Noitu Love series and Chalk.


Let's begin with an introduction of yourself.


My name's Joakim Sandberg and I make games, and I love it. My notable games are Noitu Love and Chalk, and my current project is Noitu Love 2! Yet it's not that much like Noitu 1, I'd say, more of a continuation on that universe.


Has any publishers approached you about publishing your games on handhelds? There was a lot of demand for Chalk to appear on the DS when it was first released.


Yes, there was. Several of them. But I am very weary about it; I want to know I'm not selling off something I loved to create. I am still in talks about a property, but they only see production possibly starting in a sort of far future, which is a little annoying. Nothing is signed yet though. Another big publisher contacted me too but they sort of... stopped getting back to me.

Hopefully this current one comes through. I just wish it was sooner that I'd know for sure.


So are you sort of saying 'publishers, please contact me about publishing Chalk on the DS!'?


I'd rather see Chalk on the Wii. More potential. And I have many ideas.


Homebrew are popular these days - are you willing to consider if a programmer decides to come onboard and port Chalk for the DS or Wii?


If the programmer is willing to dedicate to it that much. I'd rather know the person first, and I know that if I was a programmer and a game maker working on my own time I wouldn't want to spend it completely on someone else's idea. You'd do that in the industry, but free time is more precious.


How does Noitu Love 2 plays exactly? From early indications, it seems that it's not a conventional platformer. Will it have huge boss battles like the one from the last stage of Noitu Love 1?


Well, I won't give away the bosses, but the one in the video is quite huge, is it not? Although it doesn't reach above skyscrapers. I still have bosses to think of as well, but with the new screen you know all of two bosses! The hammer one is a miniboss though.

The game actually does play a bit different, though it might be hard to spot! It's a beat-em-up but as such you would need to be close to enemies. I wanted to retain fighting but have it really fast as well, and make it a lot easier. So you use a crosshair to click to enemies (and other things you'll encounter) to speed directly to them and start punching. That's the basics of it, then there are simple gesture moves and a shield you can place wherever you want.

Hopefully people won't find it an unnecessary feature. Personally I am hoping it gives a fast pace to a forgiving game, which has been my goal.


What's the current development status of Noitu Love 2? Is it anywhere near completion? Do you have plans to sell this sequel or will you be releasing it as freeware?

I have finished over half of the game, at least, but that's in terms of raw content, like the amount of levels. When they're done I would want to finetune and add extras. I can only hope to have it done in three months, but I am not overly confident. The game will be free though. I'd rather reach out to as many as possible with this.


So you'll be releasing the game as freeware when it's done? No preview demos or such?


I don't like making demos. Or even talking about in-production games because I get this weird pressure on me.


Since you're in IGF, anything you'd like to say to sweet-talk the judges?


You're all very pretty.


Let's say you're done with Noitu Love 2. Will you be taking a short break from development? If not, then what can we expect next from you?

I have an idea already that I want to make. It would be more in the action adventure genre, I believe. I'm hoping it will be quite an original experience. And no, I don't think I could take a break from making games.


Assuming you have lots of money to make whatever game you want. What will you make then?


I am very secretive about my ideas (at least to most people), and I really do have a dream game, but I don't want to talk about it. It would definitely be 3D.


Who do you think will make it into the IGF finals?


Fez. I don't see all the originality from it. It has original visuals but it hasn't shown much in ways of replacing just hiding stuff behind bushes in a non-rotating games. It's mostly visuals THAT I'VE SEEN so far, but I'm hoping it could bring something new to us all. I assume Clean Asia! will be there somewhere, though I haven't played it.


What are your thoughts about the 'Cave Story rip-off' controversy?


About The Underside, it's sort of a shame he wanted it to look like it does, but I'm sure it will be great fun when it's done. It's hard to make non-linear or pseudo-non-linear games yourself as it is and if he finishes, good for him. I just hope he doesn't quit because of people's attacks on his art choices.


Hope you had a screenshot prepared for us; 'cause it's sort of customary for this series of interviews! Describe it if necessary. 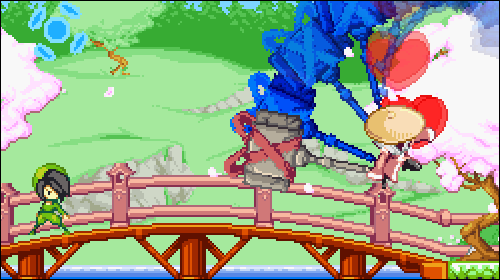 "The game actually does play a bit different, though it might be hard to spot!"

This statement is false!
it plays completely different. it's like... noitu on crack cocaine in a really slick pink tuxedo... with sparkles.

You have no reflection, I not-saw the reflection myself!

That game is going to rock so hard it'll crack the Earth in two.

Also, Xoda Rap = Paradox backwards. What will that mean for gameplay, I wonder.

I hope Noitu actually appears somewhat prominently in this game... if not, the title seems kinda inappropriate.