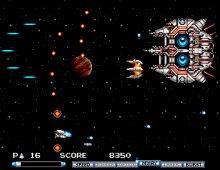 Amazingly, it works well enough. The developers have crafted a true tribute that will have the fans rejoicing. Most of the enemy ships and bosses from both series do make appearances in the game.

There's also an undocumented autofire button assigned to the V key. The choice you make in selecting the difficulty level does present different stages, which is added bonus to an already awesome package.