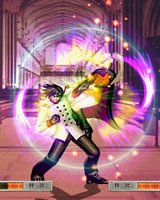 Akatsuki BK is a title from Japan that pays homage to SNK's fighting game series. The demo only showcases one character, but as evident from this character sheet there are quite a number of moves available.

It also has a complex fighting system to rival many of the classic arcade fighting games, and the 2D graphics and animation is just as impressive. Well worth a look.

Key configuration is a little messed up though. The numeric keypad controls character movements. Light, medium and heavy attacks are mapped to the J, K and L keys.

A trial version can be downloaded from this page.