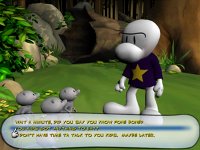 Bone: Out from Boneville is a faithful videogame adaptation of the original book series by Jeff Smith. It follows the tale of Fone Bone and his two cousins, Smiley and Phoney, as they try to find a way back to Boneville.

A mouse interface has been implemented for just about all of the actions that the player can carry out. Right-click to cycle through the available options and left-click to execute it. Inventory is easily accessible by moving the mouse pointer to the lower left of the screen. There's a hint feature to help players out should they get stuck in certain parts of the game.

The game itself is beautifully rendered and animated, especially the main characters. Fone, Smiley and Phoney are a joy to watch as they speak, argue, bicker, cajole, persuade and interact with each other. Jeff Smith would approve, and probably did. The adventure portion contains some puzzles which most veterans shouldn't have much difficulty with, and there are several mini-games to relay the action that the graphic novel potrays.

Fans of the original source material will not be disappointed with this effort. It offers long-time readers a chance to experience Fone's adventures from a different perspective. Also, there's nothing to worry about if you have not read Jeff's book. The story is retold from the very beginning and you won't feel like you've missed out on anything at all.

There's a lot of bonus stuff made available on the site as well. Particularly noteworthy is the free download of the entire soundtrack and a 'making of' video found here.