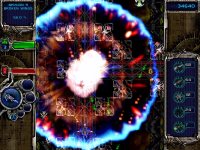 Alien Stars is a top down vertical shooter from Awem Studio that showcases very well drawn 2D sprites. Controls are a little awkward though, as the player can only guide the ship by using the mouse.

Just like Raiden, your weapon can be upgraded by collecting power-ups of the same color. You can also pick up secondary weapon supplies such as missiles or mines in addition to ship energy and shield recharge units. Not too sure what money is used for though, besides increasing your score they have practically no use since there are no shops in between levels to purchase items.

Level progress is shown on the top left, which is a nice feature. Bosses have multiple weak points to shoot at and a health indicator to represent the amount of damage they have taken.