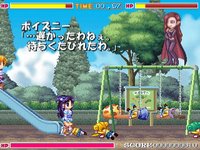 PreCure-ACT by Chinchilla is a side scrolling action game similar to Final Fight and River City Ransom. The combat system is a little limited and gameplay is nowhere near as addictive as those classics.

Most enemies only require one hit, and the game is quite easy if you learn how to time your attacks. Bosses are the only opponents that would probably offer a challenge or two. But even that would not pose much of a problem because the player can continue as many times as they want.