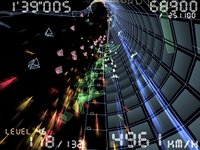 In Torus Trooper, you pilot a ship through a tunnel chasing after other enemy pilots in a race against time. Every level is split into two sections, and progress can only be made after defeating a number of ships and one mid-level boss.

As mentioned earlier, there's a strict time limit and the only way to replenish it is by defeating bosses or reaching certain scores. It's a good idea to keep pressing the up arrow key to accelerate, because your shot strength increases as you go faster.

Enemy bullets might seem a little difficult to dodge compared to other Kenta Cho's efforts, but this is where he tops himself again. You can slow down with nice grinding effects by pressing the X key. Holding down this button actually charges your special shot that can be unleashed to absorb harmful projectiles, destroy enemy ships in it's path and gain more bonuses as well.