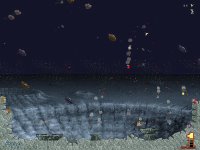 Lunar Rescue is a one level remake of an old Taito classic by Bamboo Bong Productions. A few spacemen are stranded on the moon in an unexplained incident, so your job is to save them by landing the rescue pod on the surface and bringing them back to the supply vessel.

The mission itself consists of two sections, landing and returning to the mother ship. Release your pod by pressing the CTRL key, then guide it around the asteroid field using the arrow keys. You need to use the same action button to land safely on one of the nicely arranged rocks, because coming down too fast will cause your ship to crash.

Once an astronaut is safely transported into the ship, the second part of the journey begins. The asteroids will disappear magically, replaced by hostile enemy units bent on halting your return back to the ship permanently. The CTRL key now turns into a speed boost as well as the shot button. Rescue all spacemen to complete the game.

The developers have promised more levels in future versions.