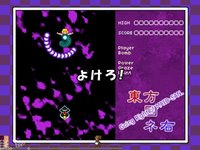 MaWaRu Maid-san wo Nemigi is an excellent WarioWare clone which can be described as a collection of mini games that usually lasts a few seconds. The player only has a short moment to figure out what the objective of the level is and go about completing it.

The game is in Japanese so the instructions given at the beginning of each stage is useless, although it's not that hard to figure out what you have to do after a try or two. Arrow keys are mostly used for movement, and the Z key is assigned as the action button. You can only fail four times before losing the game, indicated by the number of maid characters in between levels.

Requires the latest DirectX version to be installed.